The Reason We Exist 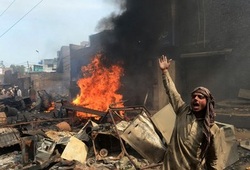 Today, Pakistan faces various forms of conflicts both as a state and society. The worst takes shape as terrorism, resulting in bomb blasts, attacks on minorities, murders, target killings, kidnapping, and other crimes. The core of these conflicts and extremist actions is driven by intolerant thought process, violent narratives, and attitude of the very society which has provided an enabling environment for the terrorism to breed rapidly. It is a recent phenomenon that our society is witnessing extremism in various forms. People across Pakistani used to live together peacefully as communities despite religio-ethnic differences. The recent shift of destruction can be particularly traced back to the last three decades. The social, political, and economic investments by the undemocratic governments can be held responsible to bring the negative change. It is important to examine the issue with regards to where the roots of the society are coming from and how society has been manipulated in a certain framework by the state actors. Successive governments under undemocratic regimes have provided structural incentives to encourage extremism and intolerance in Pakistan via school curriculum, use of public media and politicization of religion among other channels. A new generation of youth has now grown which speaks only the jargon of sectarian and ethnic divides and is forgetful of its citizenship rights and obligations and the rule of law as a negotiating site within a fully functional state. This has enormously pressurized the very foundations of the state and its obligation to treat equally all citizens irrespective of their religion, class, gender, ethnicity, etc. The state intervention for sponsoring an extremist mindset into the social fabric is particularly affecting its youth – which has outnumbered all other groups with a growing youth bulge in the country.

Youth under 29 years of age are estimated at 65.1 percent of the total Pakistani population, while in the active age group of youth between the age of 15-29 years is 30.4%. This population explosion is quickly impacting already weak public budgets on social sector development. This has failed us to accommodate youth in education, labour force and employment, civic and social participation.

There is a mass of youth who are economically vulnerable, out of schools, idle, and socially frustrated without having any public platforms to express themselves. This has inculcated intolerance, hatred, ignorance, and a sense of injustice and uselessness in the youth,  making them prone to extremist ideologies in Pakistan.

Traditional structures do not usually foster youth engagement in local and national peace building processes, so these voices are not heard by the political elite. Conflict often severs young people’s ties with communities and other youth, creating a sense of loss and lack of belonging. Delays in the transition to adulthood keep young people in low status positions. Particularly concerning is the fact that these gaps in social, political, and civic engagement provide opportunities for extremist groups to manipulate these grievances as a way to recruit youth into violent activities.

Youth of these post conflicts communities are in dire need of opportunities to participate in local conflict resolution activities and peace building.  A recent British Council study found that only one third of youth believe that democracy is the best form of governance.[1]

Any strategy to address the root cause of deprivation and conflict in these communities must involve youth in productive roles, and must build their skills in order to perform those roles effectively.  Pakistani youth do participate in their communities and work hard when they are given an opportunity.  The challenge is to provide legitimate channels to express their needs and aspirations, equal access to opportunities to participate in the civic and political life, and the skills to be productive, dignified citizens.

Young people need to feel a sense of belonging. Their optimism, energy, and genuine desire to transform society provide opportunity and hope.    However, if they feel isolated or marginalized from their families, communities and societies, they are more likely to find that sense of belonging from a plethora of ‘negative’ external forces (e.g., militant groups, extremist leaders, criminal gangs).

The increased level of religious intolerance, gaps and violence in Pakistan increases the need for genuine interfaith dialogue, tolerance and harmony that will lead to a deeper understanding of and relationship building with other faiths and beliefs.

Encountering these trends of hatred, prejudice and discrimination, IYA launched it all projects as a tool to engage youth of different faiths and cultures in conflict resolution process through community service, interfaith harmony and social media activities. By contributing towards youth empowerment will build interfaith relationships, encouraging peace, tolerance and religious harmony in Pakistan.