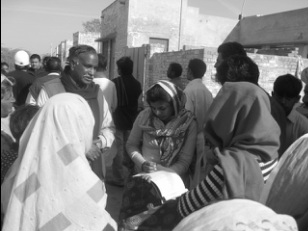 After Gojra and Kasur incidents in 2009 when 100 houses and several Christians burn alive including children, women and even their animals, we friends from Muslim and Christian faiths planed an fact finding tour to know the real situation of this brutal incident in the history of Pakistan.
After meeting with different people from Muslim and Christian communities and victims’ families, we came to know that this grave incident just happened because of misunderstanding and isolation between both communities. Extremist groups took opportunity of their gaps and lack of relationship and created such horrible situation.

During our 3 days survey we got the real inspiration to do some to safe our people from these cruel militants and extremists. By coming back Shahid Rehmat (Founding Director of IYA) took initiative and gathered some students and youth members from different faiths across Lahore and shared the ideas of having a group of interfaith youth members which led by youth to bridge gaps and building relationship amount faiths through community service and social gathering approaches, after mutual agreement we founded Interfaith Youth in Action (IYA) in 2009 a project of youth development foundation with legal status under society act 1861 in Pakistan , and started group building in Lahore, Gojra, Faisalabad and Rawalpindi. Soon we recognized by National Commission for Inter-religious Dialogues & Ecumenism, URI Pakistan, World Faith USA and Mosaic UK with the mission to promote pluralism and interfaith dialogues & cooperation to bridge the gap among diverse youth at grass root levels in Pakistan.